Star Wars Jedi: Fallen Order is an action-adventure game developed by Respawn and published by Electronic Arts. It was released for Windows, PlayStation 4, and Xbox One on November 15, 2019. The game is set in the Star Wars universe, 5 years after the film Star Wars: Episode III and 14 years before Star Wars: Episode IV and follows a young Jedi Padawan named Cal Kestis as he is being hunted through the galaxy by the Galactic Empire, all the while trying to complete his Jedi training and restore the now wiped out Jedi Order.

It’s been more than 10 years since The Force Unleashed and, with the exciting Star Wars 1313 canned in the meantime, it’s been a difficult decade for fans who are just begging to get their hands on a virtual lightsaber.

Luckily, Respawn Entertainment has finally come through with a narrative-led, Uncharted and Dark Souls-inspired Star Wars game in Fallen Order, which also turns out to be embedded in official universe canon.

Five years after the execution of Order 66 and the beginning of the Great Jedi Purge, former Jedi Padawan Cal Kestis is in hiding from the newly risen Galactic Empire. On the planet Bracca, where he works as a scrapper salvaging ships from the Clone Wars era, Cal uses the Force to save his friend Prauf from falling to his death. The incident is recorded by an Imperial Probe Droid who relays the information to the Empire. The Empire sends two Inquisitors known as the Second Sister and the Ninth Sister to pursue Cal. After they kill Prauf, Cal makes his escape, briefly engaging the Second Sister before being rescued by a former Jedi Knight named Cere and her partner pilot Greez in their ship, the Mantis. 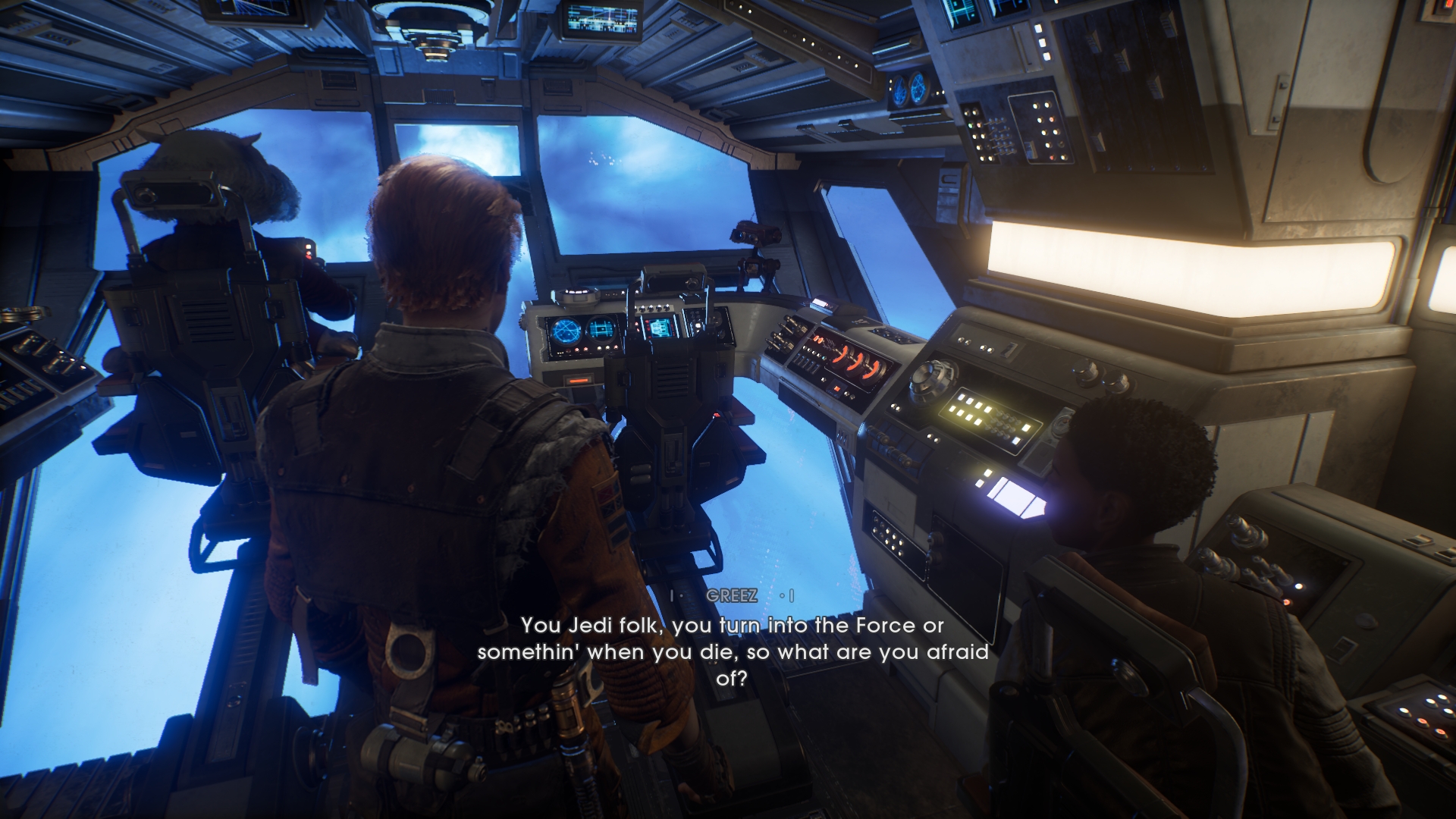 Cere takes Cal to the planet Bogano, hoping that Cal may have been able to access an ancient vault. On the way to the vault, Cal befriends a small droid named BD-1, who shows him a message from a former Jedi Master named Eno Cordova. And there is where our story truly starts.

Cal starts with only one force power and it is Force slow, but timely you will learn other ones like wall-running, double jump, force pull and force push. There are resting spots that act like checkpoints where you can rest to get your health and stim packs (healing items) back,  but enemies will respawn, or you can use the skill tree to upgrade your skills. 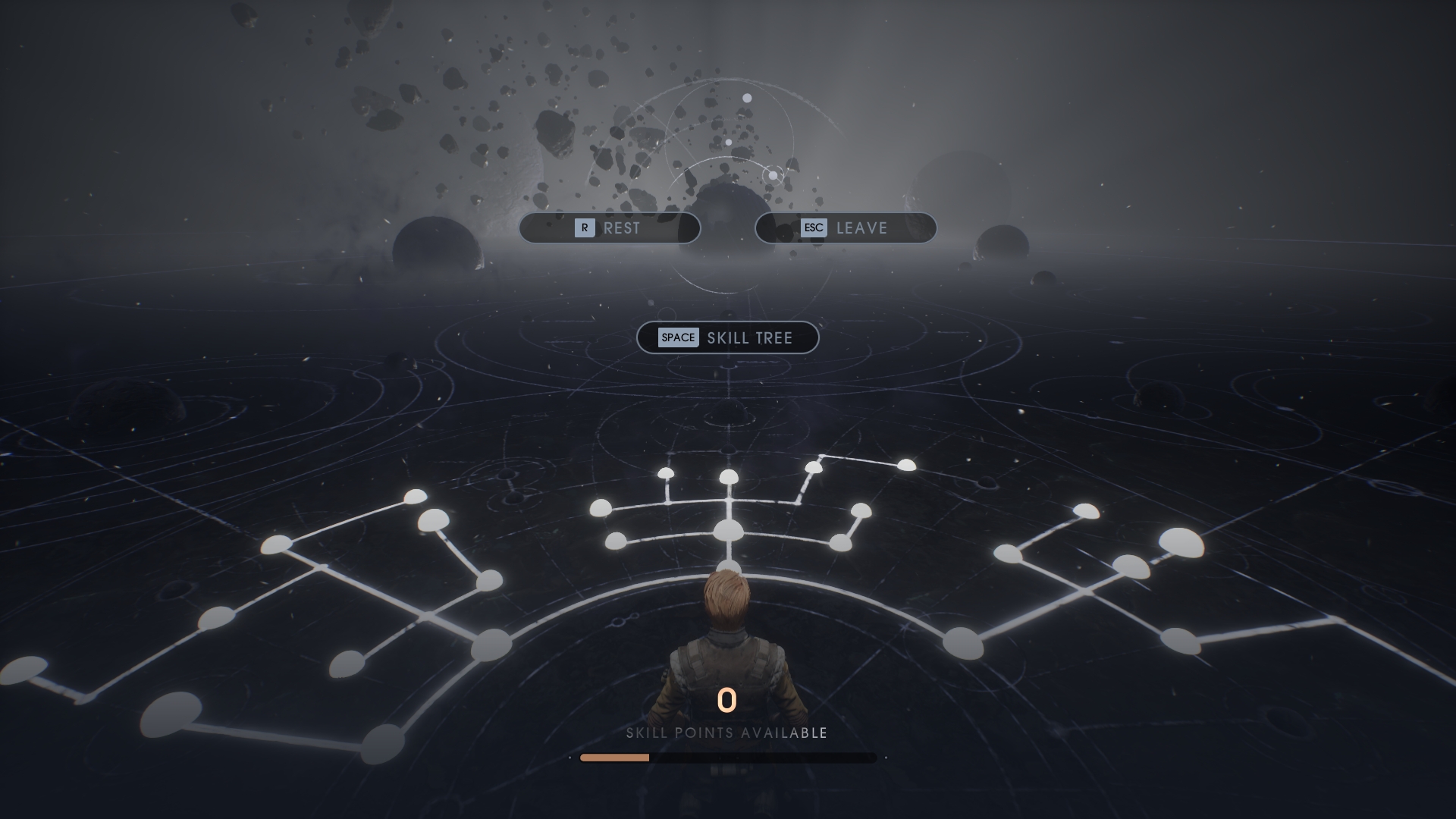 Puzzles are the main part of the game, along with a well-crafted story. Some of them are more complex and some are super easy. There are even chests that will give you cool stuff. 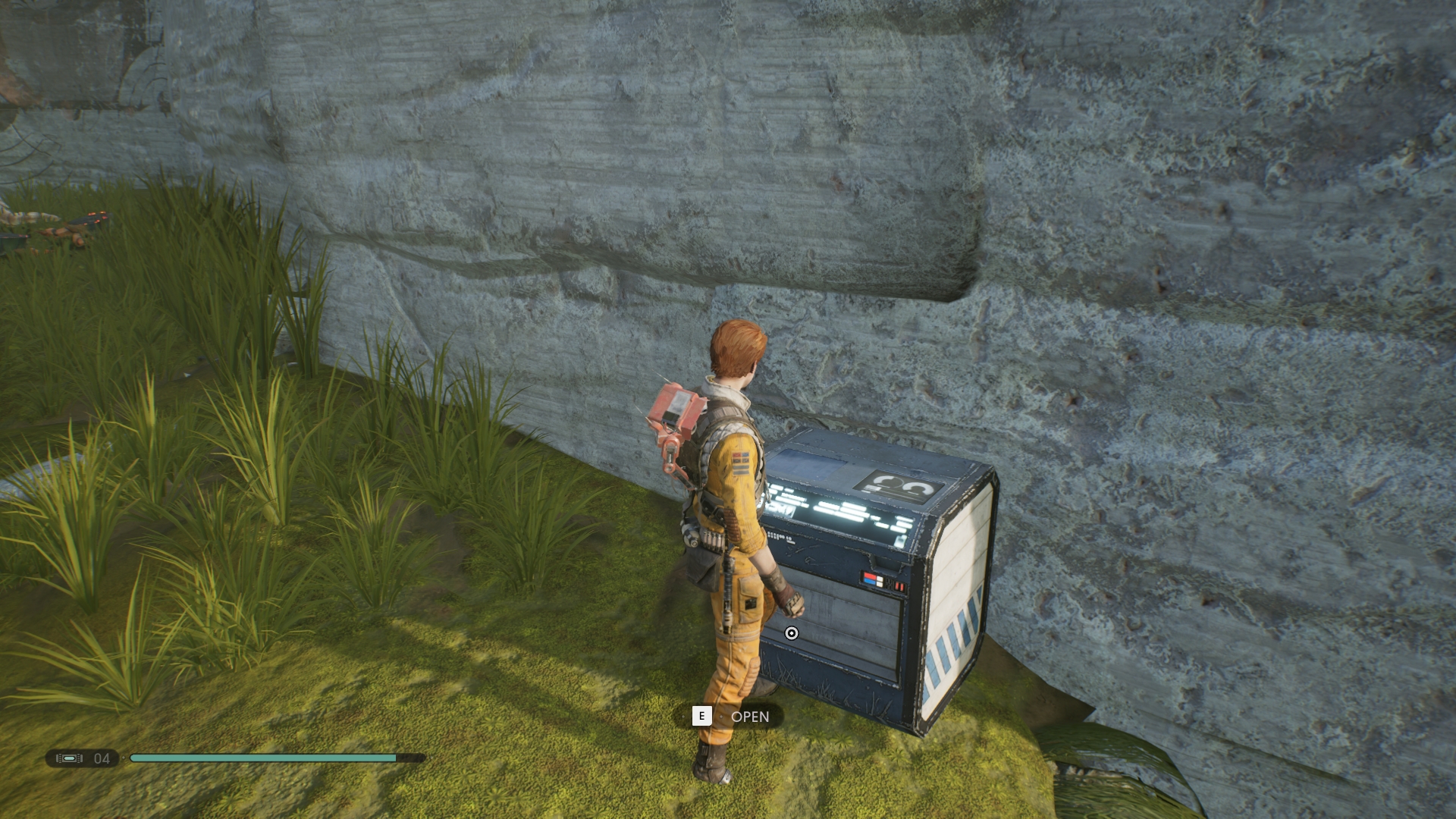 There is a lot of slashing with the lightsaber, the same as a lot of cosmetic upgrades for it. 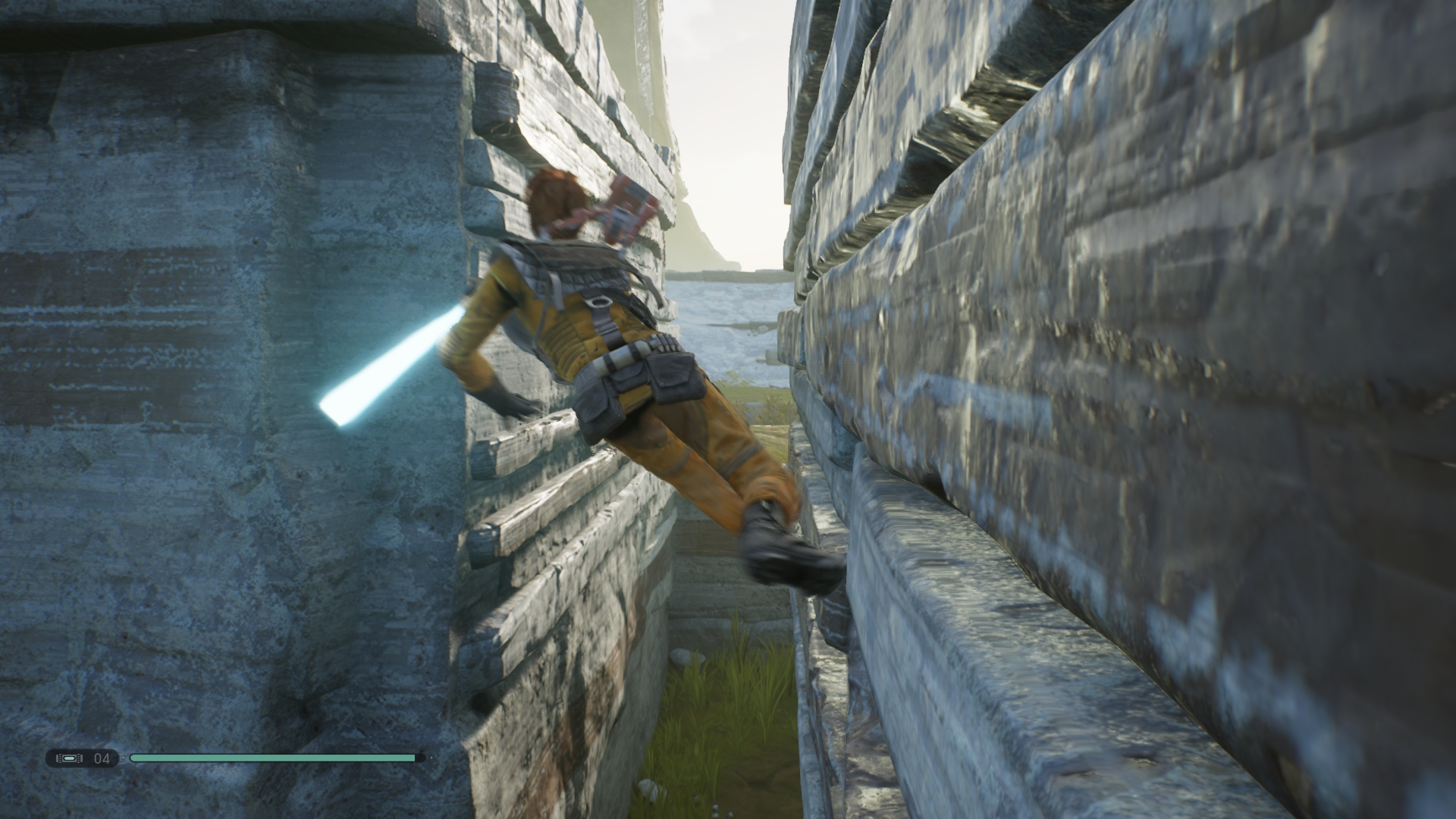 When we are talking about cosmetics, they exist for Cal, like different clothes he can wear, they exist for a cute robot, called BD-1, also for lightsaber as previously stated and for the ship Mantis. Cosmetics do not stop there. The game is amazingly crafted to show the best graphics and use of semi-limited level design. Although our levels are basically planets, we do not get to see the whole planet, ever. All we see are some tidbits and teases in the distance. The massive buildings, trees, water, and even stormtroopers sell the feel of the Star Wars universe, with a dash of Uncharted and Tomb Raider feel to it. 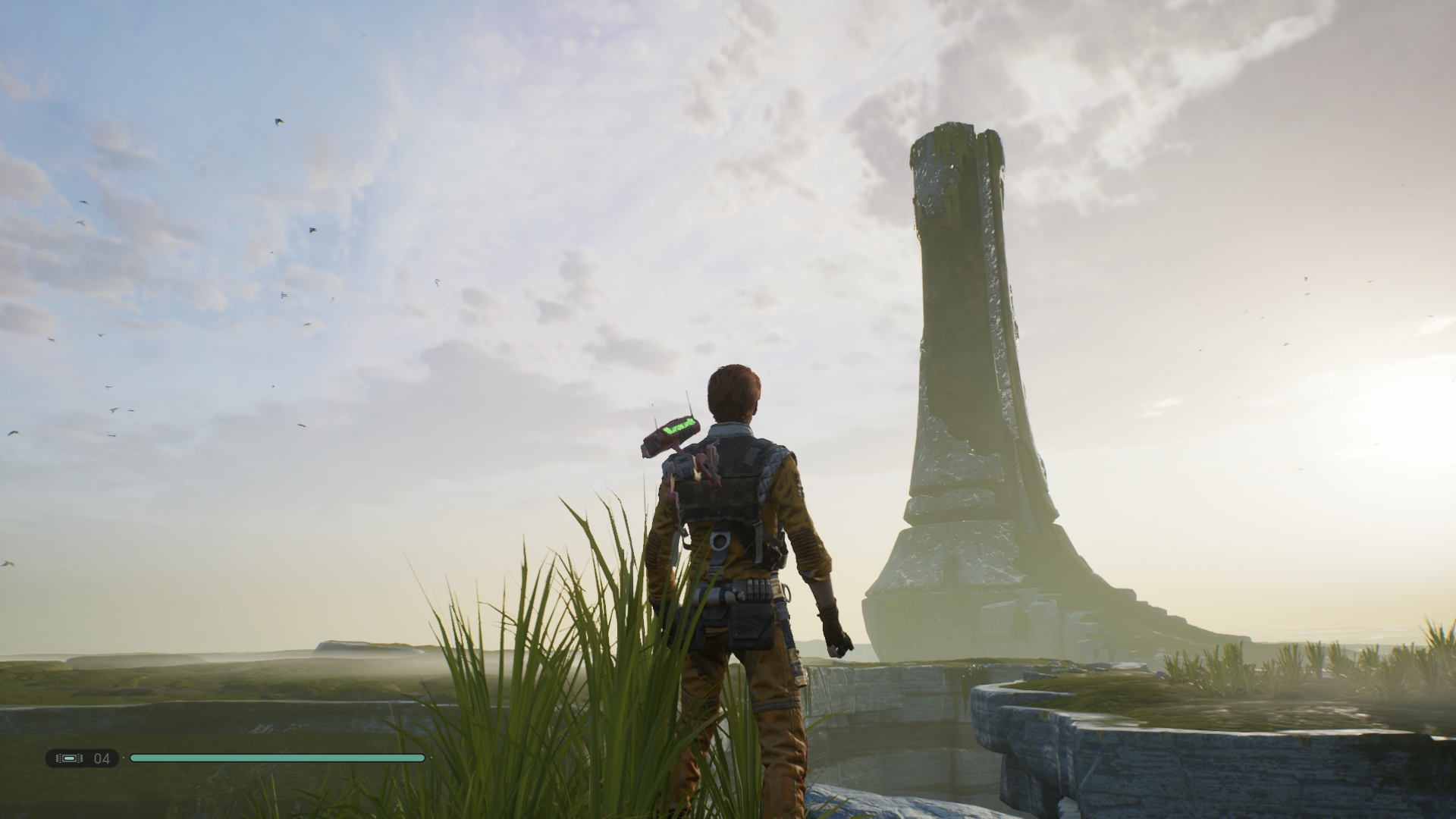 Like every game, it has special difficulties. For the faster way of completing the game, we have played on Jedi Knight, which can be considered as medium difficulty. If you want to test the story, I do recommend the Story Mode, as the fights are easier and you can focus more on the character development and storytelling of the game.

This is for sure one of the games in my Top 10 2019 games. The game combines all the good mechanics of an adventure game, with fun hack and slash elements, and astonishing graphics. I hope that everyone will be able to enjoy this game, as it is a very well crafted experience.